Posted by Julie Williams | With No Comments | In Uncategorised

This year’s lecture was introduced by Dr Chris Wells Past EFIC President, Specialist in Pain Medicine and Trustee of the Pain relief Foundation. The lecture was delivered by Chris Eccleston a Professor of Medical Psychology at the University of Bath, UK, where he also directs the Centre for Pain Research. He established the highly respected Bath Pain Management Unit in 1995, developing intensive treatment programmes for both adults and adolescents with chronic pain. He is chair of the science committee for the European Pain Federation. In 2016 he published a book entitled ‘Embodied: the psychology of physical sensation’ and in 2018 published an edited volume (with Chris Wells and Bart Morlion): ‘European Pain Management’

In September this year he received the prestigious IASP Ronald Melzack Award.

The lecture this year was given in honour of Professor Stephen Morley who was a highly respected researcher committed to advancing the rigour and quality of research in psychological treatments for pain and made huge advances in the scientific understanding of managing chronic pain. He supervised many trainees’ research, inspiring many to a career in research. He published extensively.  He edited the British Journal of Clinical Psychology. He was awarded an honorary membership of the International Association for the Study of Pain – a rare honour.  He died in 2017 aged 67.

A short appreciation of Stephen Morley’s life and work was given by  Tamar Pincus, Professor of Health Psychology at Royal Holloway, University of London. Tamar became acquainted with

Stephen Morley at her PhD viva when he was very encouraging of her work. They started to collaborate and they have since published many articles together.

The lecture was well attend by a number of Health Professionals , Alison and Clare Morley, the wife and daughter of Stephen  and Trustees and Chairman Mr David Cain of the Pain Relief Foundation. 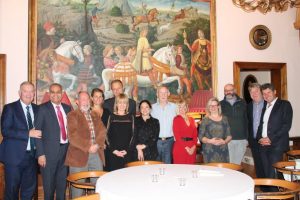